Water water rafting on the doorstep... 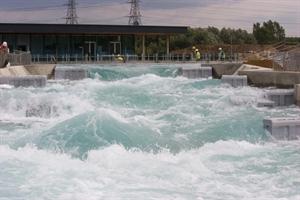 Lee Valley White Water Centre, the first new London 2012 venue the public can use before the Games, will be officially launched later.
The rafting centre, near Waltham Cross in Hertfordshire, will host the canoe slalom events during the 2012 Olympics.
Young people from London will test the rapids on the two courses before it opens to the public on Good Friday.
It is set to become a leisure facility for canoeing and white-water rafting, delivering "early legacy benefits".
Last week the centre was chosen to host the 2015 Canoe Slalom World Championships.
Saracens rugby club players, rowers, Paralympic cyclists and swimmers will be at the launch.
The white water centre has two courses - a 300m Olympic Standard Competition Course with a 5.5m descent and a 160m Legacy Loop with a 1.6m descent - with 1,200 rapid blocs.
In addition to "thousands" of bookings made by community groups, companies for corporate events and aspiring athletes, the venue will host a special schools festival, said Derrick Ashley, chairman of Lee Valley Regional Park Authority.
He said: "We've also booked in - for free - more than 2,000 schoolchildren from every London borough for a schools festival in June, underlining our commitment to legacy."
Sebastian Coe, who chairs the London 2012 Organising Committee, said: "Seeing the Lee Valley White Water Centre open to the public is a great example of an early legacy for London 2012."
David Florence, Beijing Olympic Canoe Slalom silver medallist, said: "Lee Valley White Water Centre has allowed us to start improving the training we have been doing."
The centre will be a "catalyst in boosting Hertfordshire's local business and tourist trade before, during and beyond the Games", Professor William Pope, chairman of the East of England Development Agency said.