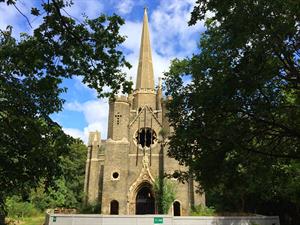 Amid the toppling grave monuments and festoons of ivy in Abney Park cemetery, at the end of Stoke Newington High Street, stands an empty chapel with a 120ft spire, like something from a traditional American horror film. It is on the Victorian Society’s new Top 10 list of endangered buildings.

According to Christopher Howse the chapel, built in grey London brick with stone facings, looked hideous when he visited the cemetery. It did not help that the building was fenced off by a hoarding to keep people out of its officially unsafe interior. The windows gape where vandals smashed the glass that once depicted roses. At one stage things got so bad that the contents of the chapel’s catacombs were scattered.

Hackney council gained possession of the chapel and the 30 acres of garden cemetery. The Abney Park Trust now tries to keep things orderly, with the help of volunteers. A warden patrols the walks by bicycle and blows a whistle at closing time. But a drinking-school of alarming tattooed men in the undergrowth on a Saturday afternoon hardly made it feel welcoming.

The chapel itself bears no saint’s name, for it is known as Europe’s oldest non-denominational chapel. Built in 1840, it was intended not as a place of worship but as a way-station for the Victorian nonconformist dead. Coffins were unloaded under a wide porte-cochère before being buried among the 2,500 labelled trees and shrubs.

The architect was William Hosking, once famous for a Victorian Spaghetti Junction, at Wormwood Scrubs, near the prison, where the Paddington canal was carried over the railway, and a public road over the canal. At Abney Park the most adventurous features were the lodges and gates opening to the High Street, built in an Egyptian style. Joseph Bonomi, an amateur Egyptologist (later to build a house at Wimbledon Park called The Camels) was consulted about hieroglyphs. His inscription is meant to read: “Abode of the Mortal Part of Man”. Augustus Welby Pugin’s Apology for the Revival of Christian Architecture in England caricatured it in a drawing of a New General Cemetery for All Denominations, abounding in Egyptian animal gods, with a funereal omnibus waiting outside.

Abney Park became the leading cemetery for nonconformists after Bunhill Fields, where Bunyan, Defoe and Blake were buried, had to close under the Burial Act of 1852. Abney Park had been opened through the energy of some Congregationalists. It pursued a policy of not separating bodies from different religious traditions, but in practice Jews and Catholics did not want to be buried there. The ground was not consecrated, and its chief attractions were arboreal, a park for the living of the locality and the relations of the dead.

The Salvation Army is strongly represented among the graves. In 1890, Catherine Booth was buried beneath a stone reading: “The Mother of the Salvation Army. Born 1829. Went to heaven 4th October 1890”. In 1912 she was joined by her husband William. The Salvationist gravestones are plain, but other memorials are more flamboyant. A huge couchant lion occupies the top of the tomb chest of Frank Bostock (who ran a menagerie and died in 1912) and Susannah his wife. Dr Nathaniel Rogers was laid in a walk-in marble mausoleum in 1884. The grave of Joanna Vassa, the daughter of Olaudah Equiano, was marked, like many others, by a draped urn. It had fallen down but was re-erected in 2006.

A statue of the hymn-writer Isaac Watts (who in his last years stayed at Abney House, but is buried at Bunhill Fields) is exposed on a tall, bare plinth. It is by Edward Hodges Baily, chosen after his success with the 18ft statue of Nelson on its 170ft column. The figure of Watts is less satisfactory, if not so feebly done as the Victorian angels over many graves that are welcomely veiled by saplings and creepers. Abney Park sits unstably balanced between picturesque decay and utter ruin