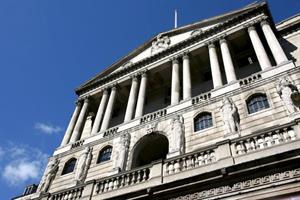 The Bank of England has raised its growth and inflation forecasts for 2017 and kept interest rates on hold at 0.25%.
It now expects the economy to expand by 1.4% next year, with inflation set to surge to 2.7% - nearly triple its current level.
Growth of 1.5% is now forecast for 2018 - down from the previous 1.8% estimate.
The revisions mean the Bank has changed its mind about when the UK economy will feel the impact of June's Brexit vote.
In the quarterly Inflation Report published on Thursday, the Bank warned that Britain's access to EU markets could be "materially reduced", which would hit economic growth over a "protracted period".
Analysts interpreted the Bank's statement as meaning the chance of an interest rate rise was becoming more likely.
Paul Hollingsworth of Capital Economics said: "The stronger outlook for the economy than previously anticipated means that another rate cut now looks unlikely. Indeed, we think that the economy will continue to surprise."
However, Paul Diggle, senior economist at Aberdeen Asset Management, said the lower growth forecasts meant "a rate cut might be back on the agenda before too long".
Sterling was trading 1.5% higher at $1.2488 after the report was released, while yields on UK government bonds also rose.